Where does most tongue cancer occur: Symptoms, Red or white patches and Treatment

Who is at high risk to get cancer of the tongue?

Cancer of the tongue appears mostly in men who are over 40 although the proportion of women with tongue cancer is increasing, probably because of increased alcohol and tobacco use.

Where does most tongue cancer occur?

Most cancer of the tongue is situated at the tip or along the side of the tongue. It can usually be discovered early. 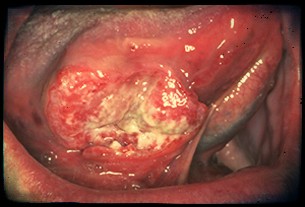 What are the symptoms of tongue cancer?

You might see deep red patches. Sometimes there are white patches. Sometimes the deep red patches turn bluish white. This is called leukoplakia, which represents an overgrowth of cells. There may be only a few spots or they may be on the whole tongue. Sometimes they will not hurt. They may be irritating and uncomfortable. The greatest danger of these patches is that if they are not treated, some of the area might turn into cancer. Some people complain of pain, which they usually think is a sore throat. It gets worse when they talk and swallow. Sometimes the pain goes to the side of the head or the ear.

Can the red or white patches on the tongue be removed?

They can be removed with an electric needle or by surgery. They are thought to be caused by tobacco smoking, alcohol, sharp edged or diseased teeth, and faulty fitting or sharpedged dentures.

Can these patches recur? Do they turn into tongue cancer?

Leukoplakia has a tendency to recur, and the recurrent areas can be retreated. The appearance of an ulcer or hard growth in one of these patches often indicates a cancerous change. An ulcer or cracking or peeling develops in the leukoplakic area, and the surrounding region becomes firm and hard. The doctor will take a biopsy of these tissues. 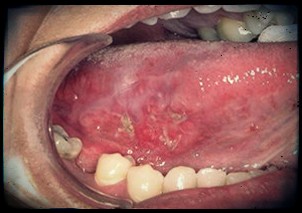 Cancer of the tongue usually appears as a painless, thickened, ulcerated area along the margin of the tongue. As it gets bigger, it may be swollen and tender and may bleed occasionally.

Does tongue cancer tend to spread?

Tongue cancer does not tend to spread rapidly. Although most tongue cancer remains confined for months to the original site before spreading to the lymph nodes of the neck, symptoms should not be ignored. If the cancer is toward the back of the tongue, it may spread to lymph nodes on both sides of the neck. .

How can tongue cancer be treated?

Usually surgery is used to remove the tumor. Sometimes radiation external beam, implant, or a combination will be used. For large tumors, neck dissection may be required.

What operations are performed for cancer of the tongue?

Cancers located on the side of the tongue are usually treated by either removing a wedge or half the tongue (hemiglossectomy). If the cancer is on the top of the tongue or in the middle forward portion of it, the doctor will usually remove the front two thirds of it. Cancers of the base of the tongue are almost always treated with radium and x-ray treatments. If the tongue cancer has spread to the lymph nodes, neck dissection will be needed to take out the nodes in the neck. If it has spread to the floor of the mouth, the areas under the tongue which have been affected will be removed. Sometimes the jawbone will be involved. If so, it may be replaced with a bone graft or a metal splint.

Is one treatment preferred above the others?

It depends upon the size of the tumor, the extent of the cancer, and the patient's and doctor's preference. Some cancers can be removed by taking out a wedge of the tongue. Another treatment involves inserting radium needles into the tongue. You should discuss with your doctor the advantages and disadvantages of all treatments before any decision is made.

Will I be able to swallow, speak, and eat normally if I have parts of my tongue removed?

It depends upon the extent of the operation. If a large portion of your tongue is taken out, swallowing can become awkward, but you can still do it. Speech may also be slightly impaired. If 75 percent of the tongue is removed, chewing may become very difficult, making it necessary for you to live on a soft diet. Again, speech may be impaired.

What kind of anesthesia is used for a tongue operation?

General anesthesia is usually used. A tube is placed in the trachea. Often there is a need for blood transfusions for this operation. Special nurses may be needed.

When will I be able to eat after the operation?

You will be on fluids, given through the tube placed in the nose and extending to the stomach, for the first few days. Then you will be able to eat soft foods.


Will I be able to speak if I have a part of my tongue taken out?

Yes, you will still be able to speak. If you have a small wedge taken out, the deformity is not great. If you have a larger cancer which might remove as much as one third of the tongue from the tip back, your speech will be changed but will remain understandable. With training, many patients, even when more than half the tongue has been removed, learn to talk again. Radium implants or x-ray treatments, if they can be done for your type and stage of cancer, do not ordinarily involve any speech deformity.

Will I have a large scar after tongue surgery?

If you have had neck dissection along with the tongue operation, part of the jawbone and the glands in the neck are removed, leaving a visible scar.
Writer Dr. S.N White Time: July 25, 2020
Email ThisBlogThis!Share to TwitterShare to FacebookShare to Pinterest
Labels cancer, Diagnosis, side effects, symptoms, Tongue cancer, treatment