When is an "orchiectomy" used for prostate cancer?

This procedure is sometimes used in the treatment of prostate cancer which has spread or when cancer recurs. Doctors have found that the spread of cancer can often be controlled for years by removing the testicles man's natural source of the male sex hormone. An orchiectomy is the removal of the testicle. Removal of both testicles is a bilateral orchiectomy.

Isn't an orchiectomy the same as castration?

Some men have the mistaken belief that removal of the testicles will leave them with feminine voices and enlarged breasts. This is simply not so if the man has passed puberty. If both testicles are removed, orchiectomy does leave the patient sterile but usually he does not lose his ability to have an erection. 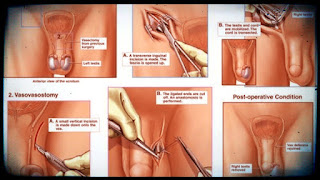 Aren't sterility, impotency, and the lack of ability to ejaculate the same thing?

Sterility is the opposite of fertility and means that you are no longer able to father a child. Men who have had a vasectomy are sterile but are still potent and can ejaculate. Impotency refers to the inability to achieve erection. Prostatectomy may or may not leave a man impotent, depending upon whether the nerves governing erection are severed. Prostatectomy will often leave a man incapable of ejaculating, as the seminal fluids are forced backward into the bladder, from which they subsequently are excreted in the urine. If both vas are also severed, he will also be sterile.
Writer Dr. S.N White Time: July 08, 2020
Email ThisBlogThis!Share to TwitterShare to FacebookShare to Pinterest
Labels orchiectomy, orchiectomy used for prostate cancer, prostate cancer