What kind of radiation treatments are used to eliminate prostate cancer?

Either external and/or internal (implant) radiation can be used. The basic principle of radiation therapy is to bombard the cancer with rays at doses which damage or destroy the cancer yet produce only a minimum of damage to the surrounding normal tissues.

What type of external radiation is used?

External radiation employs either a linear accelerator or a cobalt 60 source to pinpoint the delivery of the radiation dosage. Some doctors use radiation as the primary treatment for prostate cancers in early stages. Others use it as additional therapy for some patients with later stage disease. Radiation is usually given four or five times a week over a period of 6 or 7 weeks. It is important that the patient be in good enough general physical condition to tolerate this heavy concentration of high energy radiation. 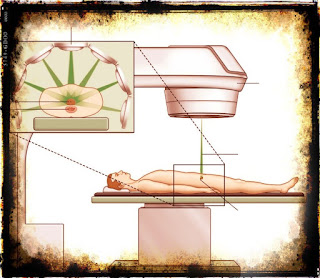 How are radium implants used in prostatic cancer?

Radioactive gold (Au198 ), iodine (I 125 ), or iridium (Ir 192 ) is implanted directly into the tumor. With the patient anesthetized, a physician inserts thin metal tubes through the pubic region into the prostate. Then, through these tubes, he inserts the radioactive pellets, which remain in the patient's prostate. This procedure requires major abdominal surgery, often including examination of nearby lymph nodes. After the initial hospitalization, this type of radium implant is not considered dangerous in any way. Even in the hospital, forceps, linens, bandages, and so on are handled in the normal way. The patient does not endanger others and is advised that he may resume his normal living habits, having normal sexual relations, and that he can be near children and pregnant women without any fear for their health or safety due to potential contamination. Radium implants are sometimes combined with external radiation. The advantages and disadvantages of each kind of cancer therapy will become clearer as researchers monitor patients' progress over long periods.

Radiation therapy for prostate cancer: What to expect

Chemotherapy may be used alone or in combination with surgery or radiation especially for treatment of late stage cancer of the prostate as an investigational treatment.

Side Effects of Radiation Therapy for Prostate Cancer

What are the advantages of radiation therapy and radiation implants over prostatectomy?

Both kinds of radiation therapy are being used to treat some prostate cancers and the success rates indicate that these treatments are as effective or more effective than radical surgery, depending upon the spread of the disease. Since potency is maintained in 75 percent of patients following radiation, this is a consideration, particularly in men who are still sexually active. It is important that you discuss this question with the doctor before undergoing treatment.
Writer Dr. S.N White Time: July 08, 2020
Email ThisBlogThis!Share to TwitterShare to FacebookShare to Pinterest
Labels cancer, Chemotherapy, prostate cancer, prostate cancer radiation treatment side effects, Radiation therapy for prostate cancer, radiation treatments, radium implants