What not to do after a hysterectomy?

What is a hysterectomy?

Technically, hysterectomy means only the removal of the uterus. It does not refer to the removal of ovaries or fallopian tubes, which are sometimes removed at the same time. However, most women use the term vaguely, and many do not know exactly what was removed. You should be sure to ask your doctor to explain exactly what he is planning to remove and why. In cancer of the endometrium, the surgery usually includes removal of the uterus, ovaries, and fallopian tubes. 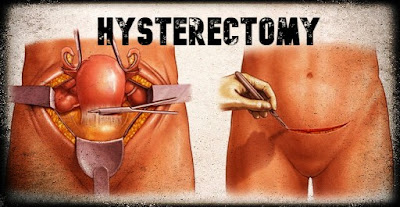 Are most hysterectomies performed because cancer is present?

No. Most hysterectomies are performed because of fibroids and hyperplasia.


What is a fibroid tumor?

A fibroid tumor is a noncancerous growth composed mostly of muscle and fibrous connective tissue. Fibrous tumors are most common among women who are over 35 years of age, and are not usually dangerous unless they grow very large. It is estimated that about 40 percent of women over 50 have fibroid tumors. Most fibroid tumors shrink after menopause. If a fibroid tumor grows large, it will usually cause bleeding and may cause pressure on the bladder, rectum, or ureter. Estrogen replacement may cause them to continue to grow. If you have fibroid tumors, they should be checked by your gynecologist. However, unless they are causing problems, they do not need to be removed. Only about three cases of fibroid tumors in every thousand become cancerous.


What kind of tests are done before a hysterectomy is performed?

A complete blood count, urine analysis, electrocardiogram, and x-rays of the chest are done before a hysterectomy is performed. Usually an intravenous pyelogram and a barium enema are used as part of the preparation tests.

What kinds of problems do doctors run into in making a diagnosis about hysterectomy?

Because it is difficult to examine the entire area fully, diagnosis is often complicated. Fibroids, for instance, can completely fill the uterus. They can be quite solid, but if they begin to degenerate, they become soft. X-rays will detect a large mass, but cannot differentiate between a large fibroid and an ovarian cyst.


What is a vaginal hysterectomy?

That is when the doctor performs the operation through the vagina, so that no incision is necessary.


Will I have menstrual periods after the hysterectomy?

No. After a hysterectomy, you will not have any more menstrual periods, nor will you be able to become pregnant.


How long does it usually take to perform a hysterectomy?

It usually takes between 45 and 90 minutes to perform a hysterectomy.


What type of anesthesia is usually used?


Will I have problems with urination or bowel movements following the operation?

As with most abdominal surgery, patients find it difficult to urinate at first following the operation. It will be several days before the bowels resume their normal functioning.


Can I expect to have vaginal discharge and bleeding following the operation?


How soon can I take a tub bath?

It is usually wise to wait for about a month after the operation before taking a tub bath, but it is safe to take a shower once the abdominal incision has healed.


What kind of incision is made for a hysterectomy?

Usually a 4 to 8-inch incision is make in the lower abdomen below the navel. Some surgeons place the incision vertically; others do a horizontal incision. If you have a preference in this matter, you should mention it to your doctor so you can discuss it with him. Some hysterectomy procedures, especially when vaginal repair is necessary, are performed through the vagina so that no incision is required.


Is a catheter used following hysterectomy?

Yes. A catheter to empty the bladder is usually used for several days following either abdominal or vaginal removal of the uterus. If stretched muscles ofthe bladder and rectum are tightened at the time of the hysterectomy, a catheter may be left for as long as 6 to 8 days.


How will a total hysterectomy affect my lovemaking abilities?

Some women relax more and enjoy better orgasms because they no longer fear becoming pregnant. They report that lovemaking becomes more spontaneous and pleasurable. Other women have vaginal dryness associated with hormonal changes. This can often be corrected with watersoluble lubricants, estrogen creams, or estrogen supplements. The loss of ovarian androgens, affecting the supply of testosterone (the sexuality hormone), and/or the loss of the cervix and uterus (important in the sexual response of some, but not all, women) can also cause changes in sexual response. Although for many women the clitoris is more vital to female orgasm than the cervix and uterus, it is now known that for some women, the quality of the orgasm seems to be related to the movement of the cervix and uterus and may be altered when these structures are removed.