What is the best and beneficial treatment for endometrial hyperplasia?

Endometrial hyperplasia is an overabundance of cells lining the uterus. It is generally considered a precancerous condition. Severe hyperplasia is often called in situ cancer of the endometrium. Though every case of hyperplasia does not develop into cancer, uterine cancer always goes through a hyperplastic stage before becoming cancerous. Therefore, hyperplasia is a warning that cancer may develop. 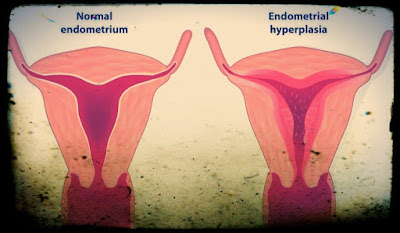 What are the symptoms of hyperplasia?

If the uterus is hyperplastic, bleeding will occur. In addition to heavy menstrual periods, there will be bleeding at irregular intervals.


What is the best treatment for endometrial hyperplasia?

Treatment of endometrial hyperplasia depends largely on the stage of the disease and the age of the patient. In young women, endometrial hyperplasia is often associated with irregular menstrual cycles. These women are usually given female hormones to try to regulate the cycles, and the tissue of the endometrium is sampled often to check the success of the treatment. In women who are near their menopause, the conditon is treated with progesterone, if it is not severe. In severe cases and for postmenopausal women, a hysterectomy is the usual best treatment.


What causes bleeding between periods?

Bleeding between periods can be caused by many different conditions: polyps in the cervix or uterus, fibroid tumors, overactivity of the endometrial lining, and vaginitis in which the skin of the vagina thins and bleeds easily, to name just a few. Bleeding between periods is abnormal and indicates that you should be examined to determine the cause. Any bleeding that occurs 6 months or more after your period has stopped should be investigated by your doctor.


Is it normal to have heavy clotting during premenopause?

Heavy bleeding and clotting are very common during premenopause. As the ovarian function decreases, the pituitary gland attempts to make the ovaries respond and a large amount of estrogen is produced by the body. The endometrium becomes filled with tissue, and when the buildup starts to shed, heavy clotting and bleeding result.


Why does the doctor prescribe progesterone when I have heavy bleeding and clotting?

He does this to test the reason for the heavy bleeding and clotting. After you have taken progesterone for 1 week, the uterus can usually be stimulated to return to a more normal menstrual rhythm. If normal periods return, the doctor knows that the heavy periods were caused by a lack of ovulation and progesterone. If the heavy bleeding and clotting continue, further investigation is necessary.


What is the treatment for cancer of the endometrium?