What does the different classes of pap test mean?

What do the different classes of Pap test mean?

Pap test results are usually assigned numbers from 1 to 5, although some laboratories use slightly different systems. 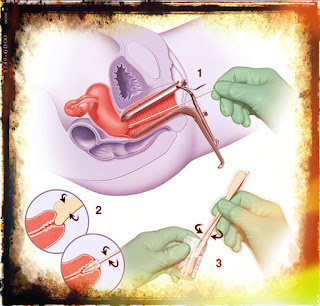 The usual meaning of the tests is as follows:

• Class 2: Some atypical cells present but none suggest cancer. May be due to an inflammation and/or possible infection. Usually no treatment is prescribed because many of the abnormalities return to normal without any treatment. Pap test should be repeated between 3 and 6 months.

• Class 3: Some abnormal cells present, suggesting but not confirming the presence ofcancer. Referred to as dysplasia. The degree and kind of abnormality is greater than Class 2 test. Follow up smear and biopsy may be needed.

• Class 4: Smear contains some cells that appear to be cancerous. There are signs of early cancer. Follow up smear and biopsy needed.


What does the doctor do if I have a Class 2 Pap smear?

It depends on other conditions. A Class 2 Pap smear can be the result of a bacterial infection or inflammation, for example. If there is some evidence of inflammation, the doctor would probably treat you for that condition and then repeat the smear.


What does the doctor do about a Class 3 Pap test?

It depends upon what else the pathologist told the doctor about his findings. If no lesion is seen, usually a Class 3 would call for another Pap smear test. If the second test was also a Class 3, a biopsy would probably be performed. Sometimes the Class 3 level is referred to as dysplasia, which is still a noncancerous condition. The relationship between cancer and dysplasia is not entirely clear. Class 3 cells can return to normal cells for no obvious reason and without treatment.


What would the doctor do about a Class 4 or a Class 5 test?

In both cases, a biopsy would be done. Class 4 means the degree of abnormality has reached the level at which a biopsy should be taken to determine whether or not cancer is present. Class 5 means that the cells appear to be even more bizarre and are apt to be associated with a more aggressive and more widely spread tumor. Remember, as noted before, the classification of the Pap test may vary from one laboratory to another. Normally, your physician would discuss the findings with you. Rarely would you be given a numerical classification without an explanation.