What are the treatments for Stages 1 through 4 cancer of the cervix?

In its early stages, cervical cancer is usually treated with surgery or radiation or a combination of the two. Chemotherapy is often recommended for later stages ofthe disease. Stage 1 cervical cancer is usually treated with either surgery or radiation therapy. Surgery is often selected in younger women because it preserves the reproductive and hormone producing activities of the ovaries. In older women radiation may be selected because it is more easily tolerated than surgery, particularly if other medical problems are present. Surgery may be combined with radiotherapy if the shape of the tumor in the cervix makes insertion of radioactive implants difficult. 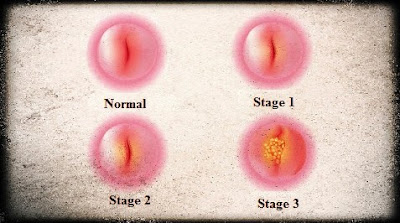 Most patients with cervical cancer Stages 2 through 4 are treated with radiation therapy alone, although for some younger patients with early Stage 2 disease, surgery may be the treatment of choice. Radiation is usually a combination of external and internal radiation.

If the cancer has spread extensively or has reappeared after initial treatments with surgery or radiation, chemotherapy may be used.

Investigational treatments include using various combination of chemotherapy drugs, immunotherapy agents such as C. parvum, and radiation sensitizers (drugs such as misonidazole and hydroxyurea, which are given before radiation therapy to make the cancer cells more sensitive to the radiation).


Is the conization used for treating early cervical cancer the same procedure that is used in diagnosing it?

Yes. A conization takes a cone shaped piece of tissue and involves removing the central portion of the cervix and its outer opening. The amount of tissue removed depends on the size and location of the abnormal area.