Testicular Cancer:Diagnosis,symptoms,types,treatments and all questions

How is testicular cancer usually discovered?

Most testicular cancers are discovered by patients themselves, by accident or by practicing a simple exam known as TSE or testicular self examination. TSE is usually done once a month, during or soon after a warm bath or shower. While standing, the man gently rolls one testicle between his thumb and fingers, checking for lumps, swelling or other changes.

The process is repeated for the other testicle. Is testicular cancer a common type of cancer? 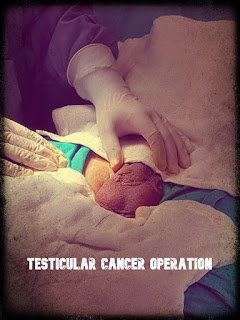 Is testicular cancer more common in those who have undescended testicles?

Yes. In the male fetus, the testes are formed farther up in the body, near the kidneys, and, in normal development, descend to the scrotum shortly after birth. If they never make this descent or descend after the age of 6, the chances of testicular cancer developing in later years is forty times more likely than if they properly enter the scrotum.

What are the symptoms of testicular cancer?

The first sign is usually a small, hard lump, about the size of a pea or a slight enlargement or change in the consistency of the testes. There may be a dull ache in the lower abdomen and groin, accompanied by a sensation of dragging or heaviness. If the tumor is growing rapidly and hemorrhage is present, there may be sharp testicular pain. Enlargement of the breast or tenderness of the nipples may also be noticed.

How is cancer of the testicle diagnosed?

First, infection and other diseases are ruled out by physical examination and medical tests. Because most tumors in the testes are cancerous rather than non cancerous, the standard procedure for a suspicious lump in the scrotum is surgical removal of the entire affected testicle. This is done through an incision in the groin. The operation is necessary to get the diagnosis. However, it also prevents further growth of the tumor and, if done at an early stage, may stop the spread of the cancer to other parts of the body. A biopsy is not performed for testicular cancer because it would need to cut through the fibrous outer capsule of the testis and could contribute to the spread of cancer cells. 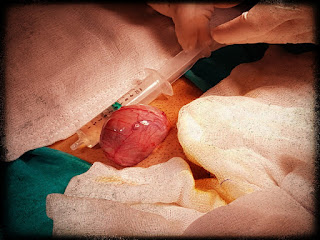 Are there different kinds of testicular cancer?

Yes. Actually, there are many different kinds, but they are generally placed in two broad types of germ cell cancers: seminomas and nonseminomas. Seminomas account for 40 percent of all testicular germ cell cancers.

Yes. Surgery the removal of the suspected testicle is usually the first step. Treatment ofthe affected lymph nodes varies according to the type of cells found in the tumor.

Can I go to my local doctor for treatment of testicular cancer?

Since this is a rare form of cancer, the patient with suspected testicular cancer would be well advised to seek out a urologist specializing in cancer in one of the large medical centers to be certain that he receives the optimal treatment for this disease. Close cooperation and exchange of information among surgeon, radiotherapist, and medical oncologist is a must to ensure the successful outcome ofthis type of cancer.

Is a biopsy usually done before a testicle is removed?

No. This is one of the cases where the usual simple biopsy is not used for diagnosis. Doctors are warned against using needle aspiration or cutting into the tumor. In most cases, the doctor will schedule you for an operation to remove the testicle. Further therapy is based on results of a permanent section biopsy not on a frozen section examination.

Are any blood tests used in testicular cancer?

Two serum markers blood proteins that often become elevated in cancer patients have greatly helped in staging testicular cancers, monitoring how well the treatment is working, and detecting early relapse. The markers are AFP (alpha fetoprotein) and HCG (the beta subunit of human chorionic gonadotropin). The markers are measured before and after surgery to help determine if any cancer cells remain. 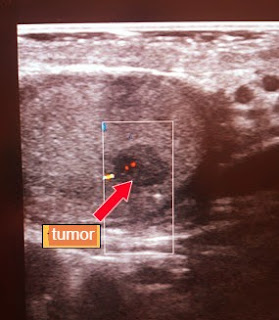 Does removal of one testicle affect potency or fertility?

No, providing the remaining testicle is normal.

After removal of a testicle (orchiectomy) and x-ray therapy, is it still possible for a man to father a child?

If the radiation can be calculated to pinpoint the specific site without damaging surrounding tissues or organs, it may be possible to avoid sterility. Sperm can also be frozen and stored in a sperm bank for later use in case the patient does become sterile. Be sure to thoroughly discuss with your doctor before treatment the entire question of fertility, radiation, and sperm storage.

What is the role of chemotherapy in testicular cancer which has metastasized?

Chemotherapy was first found potentially curative for testicular cancer in the late 1950s. Many trials and protocols have been tested in the past 30 years and it is important that your doctor be aware of the latest treatments being used. Several drugs have been found to be effective, and some patients with metastatic testicular cancer can now be cured with combination chemotherapy. The treatment is difficult, however, and requires an experienced medical oncologist to administer it.

Why are the abdominal lymph nodes removed in testicular cancer?

Surgery to remove the abdominal lymph nodes may be necessary in some patients in order to stage the disease accurately. Since cancer of the testicle spreads first to the retroperitoneal lymph nodes (the nodes deep in the abdomen below the diaphragm), this surgery may also help control the disease by taking out any nodes which are involved.

What kind of follow up therapy is needed after treatment for testicular cancer?

Testicular cancer patients need continuing medical followup, including regular x-rays with CT scans of the lungs and abdomen and monthly checks of serum marker levels for one to two years. After that, checkups are scheduled once or twice a year. If there is evidence that some cancer remains or that the cancer has spread or recurred, maintenance chemotherapy may also be necessary.

Today, cancer of the testicle is considered a highly treatable, usually curable cancer. The outlook for patients, of course, varies depending upon the extent of the disease when diagnosed, the tumor cell type, and the growth rate. 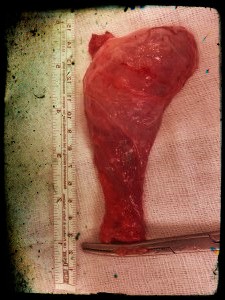 Do operations performed when cancer is found in the testicle have an effect on sexual ability or fertility?

Treatment for testicular cancer, if the cancer is localized in the testicle and is found to be of the seminoma type, usually requires that the testicle and the other surrounding glandular structures be removed. If cells other than seminoma cells are found, more extensive surgery is required to help prevent spread ofthe cancer into the lymph nodes that drain fluids from the pelvic area. A gel filled implant, which has the weight, shape and texture of a normal testicle can be inserted surgically, either at the time of the original operation or later, to restore normal appearance. Since cancer of the testicle rarely involves more than one testicle, erection is usually still possible. There may be a decrease in ejaculate, but the remaining testicle should produce enough sperm for a man to be able to father children.

What technique can be used to increase fertility for men who have had testicular surgery?

This surgery may cause a decrease in ejaculation because nerves are cut during surgery and may result in infertility. However, there is a chance you may still have the ability to father children, even though you may be producing less semen. A study by a German doctor, since confirmed by patients at Memorial Sloan Kettering Cancer Center Hospital in New York City, shows that some men who wish to father children may be able to raise their sperm counts by having intercourse on a full bladder, standing up, if possible, to force the fluid to be deposited properly.

How can I make arrangements to store my sperm so that I can father children if I become sterile because of my operation or radiation?

It may be possible for sperm to be frozen and stored in a sperm bank for later use in case you become sterile. However, many men with testicular cancer are ineligible for sperm banking because their sperm production may be impaired as a result of the disease itself. It is important to discuss with your doctor before treatment the entire question of sterility, radiation, and sperm storage.

How do sperm banks work?

Sperm banks usually provide indefinite storage of sperm for cancer patients, pre vasectomy patients, and others. Usually, enough semen is collected and frozen to provide an adequate amount to be used for a 6-month period. An analysis of the semen is done to assess the quality and assure that it can be banked satisfactorily. Usually, the first sample is used to assess the quality, then a 48-hour trial freezing is done and the quality is tested again. In order to ensure an adequate amount of semen, the patient is asked to come to the lab with a semen sample every 48 hours for several weeks, until enough semen has been provided. It is essential that the specimen be delivered within a half hour after ejaculation to ensure potency. The patient is asked to sign a consent form to allow the sperm to be stored. Sperm banks are available in various areas in the United States. Your doctor or the Cancer Information Service (1-800-4- CANCER) can provide you with a listing of the locations.

While some types of chemotherapy can cause impaired fertility, a recent study showed that fertility can return in some patients 2 to 3 years after treatment.

What is the effect of radiation of lymph nodes on fertility and sexual function in testicular cancer?