How is cancer of the nose and sinuses treated? Synptoms and Operation

What are the parts of the nose?

The nose is made up of connective tissue (cartilage) and bone. It contains two cavities, which are separated in the middle by a septum. The nose serves as the organ of smell and is the airway for breathing. It filters, warms, and moistens the air which is breathed in.

What are the sinuses?

The sinuses are air spaces within the bones of the face and the skull. They connect through small openings (ostia) into the air passages in the nose. The soft, moist mucous lining which coats the inside of the nose extends into the sinuses. There are four types of sinus: frontal (within the bone just above and behind the eyebrows), maxillary (in the bones of the cheeks beneath the eyes), ethmoid (near the side of the nose and inner part of the eyes and going back into the skull), and sphenoid (in the skull above the level of the nose). 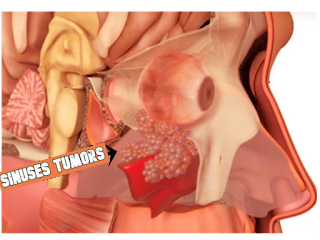 Is cancer of the sinuses common?

No. Cancer of the sinuses is very rare. Most often it is the maxillary sinus that is involved in the disease.

What are the cancers of this area called?

The cancers in the nose area are called cancer of the nasal fossa (nasal cavity), paranasal sinuses (sinus), and nasopharynx (tube which connects the mouth and nose with the esophagus).

What are the symptoms of cancer of the nasal area?

One symptom is a reddish, easily bleeding mass in the nasal passage. Sometimes paranasal sinuses will produce pain and pressure in the cheek, a toothache, or persistent draining of the sinus after tooth extraction, a nasal quality to the voice, a lump in the cheek, or bloodstained discharge from the nose.

How is this tumor diagnosed?

The doctor uses a head light and a small mirror or a nasopharyngoscope (a flexible optical instrument) to look in the passages. He may also order x-rays of the facial bone. He can take a biopsy or a brush scraping with the nasopharyngoscope.

What is nasopharyngeal fibroma?

This is a tumor of the nasopharynx which is found mainly in youngsters. It is a benign tumor but may destroy bone and soft tissue about it as it enlarges. It should be diagnosed early. It is curable, but sometimes several operations are needed. Sometimes radium implant, radiation, or cryosurgery is used to remove these tumors.

Are the tumors in the area of the nose and sinuses always malignant?

No. There are many noncancerous tumors in the area of the nose and the sinuses. Warts, polyps, and small blood vessel tumors are often found and are usually nonmalignant.

How is cancer of the nose and sinuses treated?

Surgery and radiation therapy are the treatments, depending on the site of the tumor and the extent of it. Sometimes sections of the nose, the roof of the mouth, the floor of the eye socket, or the face and the cheek must be excised. Radiation can be used before or after surgery.

Nasal and Sinus Cancer - What Is It? What are the Symptoms and Treatment? - Head and Neck Cancer

Why is such drastic surgery performed?

The main goal is to get beyond the cancer. Many lives have been saved with this kind of surgery, and the advances in plastic surgery mean that people can be restored to normal appearance.

How is cancer of the nasopharynx treated?

Cancer of the nasopharynx is usually treated with radiation therapy or with surgery or both, depending upon the extent of the disease.
Writer Dr. S.N White Time: July 24, 2020
Email ThisBlogThis!Share to TwitterShare to FacebookShare to Pinterest
Labels cancer, Head and neck cancer, Nasal and Sinus Cancer, nasopharyngeal fibroma, nose cancer, operation, sinuses cancer, sinuses treated, Synptoms