How does estrogen drug Des (Diethylstilbestrol) cause cancer?

When did we discover that the estrogen drug DES might cause problems?

It was in 1971 that doctors discovered a link between DES (diethylstilbestrol) and cancer of the female reproductive system. Clear cell adenocarcinoma of the vagina or cervix was found in a very small number of young women whose mothers had taken DES type drugs during pregnancy. 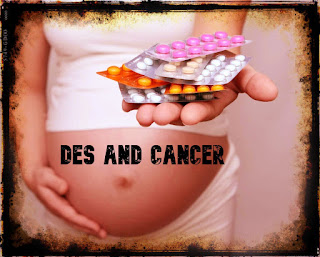 What was the purpose of giving the drug to pregnant women?

During the 1940s and on into the 1960s the drug was given to women to prevent miscarriage. It was one of the first synthetic estrogen type hormones developed that was inexpensive and could be given by mouth. Many of the women who took it had lost babies, were spotting or bleeding, or had other complications such as diabetes.

Does the risk of cancer depend upon the amount of the DES type drug taken during pregnancy?

The amount does not seem to be the important factor. The exposure during the first 5 months of pregnancy seems to be more of a determining factor than the amount. 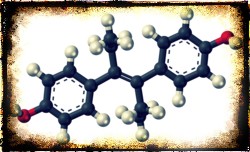 What does research show was the most dangerous time for taking DES?

If DES or other hormones were taken before the eighth week, some effects may show up, but most probably will not be of a serious nature. The most critical time is when hormones were given between the eighth and eighteenth weeks. These are the cases where vaginal abnormalities are more likely. If taken after the eighteenth week, defects are extremely rare.

What are some of the problems the doctors have found in DES daughters?

There have been changes in the lining or wall of the vagina. Normally, the uterus is lined with a red (vascular) and moist (glandular) tissue that meets the pink, drier tissue of the vagina at the outer opening of the cervix. In DES daughters, this red tissue frequently extends into the cervix and is called eversion. Some DES daughters have spots of the red moist tissue on the walls of the vagina as well. Other DES daughters have an extra rim of tissue around the cervix. Depending on whether this rim is partial or complete, it might be referred to as a rooster's comb, cock's comb hood, collar, or pseudo polyp. 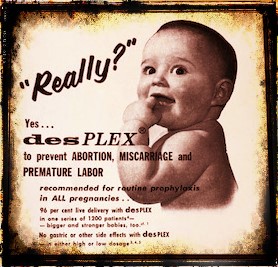 Are the DES daughters being followed to determine what the long term consequences of the drug will be?

A project funded by the National Cancer Institute and conducted by the Mayo Clinic is maintaining contact with a group of nearly 4,000 DES-exposed daughters as well as over 1,000 women whose mothers did not take DES. The project gets information each year from these women through questionnaires sent through the mail. There have also been investigations reviewing some 1,300 daughters identified through a review of their mothers' medical records and who were most representative of the total population of women exposed to DES before birth.

Have cancers been found in the DES daughters?

An unusual cancer of the vagina or cervix called clearcell adenocarcinoma has been found in a small number of young women whose mothers had taken DES. Four cases have been reported among the DES daughters in the study, far fewer than had originally been anticipated. In addition, women 26 years of age and older had changes in the vagina less often than did younger women, suggesting that some effects of DES exposure may be lessened as women grow older. In a 5-year study of DES daughters, the two most common abnormalities the presence of glandular tissue on the cervix, called cervical ectopy, and the presence of a ridge of tissue encircling the cervix had diminished in more than half the women and had entirely disappeared in about a quarter of them.

Are DES daughters at higher risk for other cervical cancers?

It is now felt that DES daughters may also be at higher risk for developing the most common form of cervical cancer. A study shows that DES daughters are twice as likely to develop early cellular changes called dysplasia that might lead to cervical cancer. Only further study will tell whether these early cellular changes do indeed lead to a higher rate of cervical cancer in women exposed to DES. Dysplasia is the presence of abnormal but not cancerous cells. The study also notes that dysplasia rarely occurs in women who have never had sexual intercourse and that there was a definite connection between dysplasia and an early age of first intercourse (before 20), multiple sex partners, multiple pregnancies, and exposure to a male sexual partner who had had several sexual partners. It also discovered that genital herpes occurred twicers often in DESexposed daughters, but the reason was not known. Barriertype contraceptives, such as diaphragms and condoms, are a method of preventing contact with viruses that might further increase the risk for developing cervical cancer.

What kind of cancer could dysplasia lead to?

Dysplasia does not always go on to develop into cancer. In some women, however, dysplasia does go through a series of changes and then develops into cancer if it is not treated. Squamous cell cancer is the form associated with dysplasia. Women generally do not get such cancers until they are around 35 to 40 years old. The majority of the DES daughters are still too young to develop this type of cancer.

Are there risks in DES daughters becoming pregnant?

Studies show that DES daughters have no problem becoming pregnant. And most 80 percent carried the babies successfully to full term. Of the daughters who have had problems, premature births, miscarriages, and stillbirths were the major difficulties. Many of the women in the study project are just entering their childbearing years, so it will take many more years before all the information on this subject has been accumulated.

Early studies found that DES exposed males more often had underdeveloped or undescended testes and other abnormalities such as cysts, low sperm counts, and possibly abnormal sperm forms. Later studies contradict this information and do not find any increase in risks of abnormalities in the genitourinary tract.

Do the mothers who took DES have problems?

There have been several studies and extensive followup among women who used DES during pregnancy. Those who took DES have an increased risk for breast cancer; they develop it almost one and one half times more often than those who did not take DES. However, the scientists could not tell whether it was the DES itself or something else that accounted for the increase in breast cancer. The risk seems to become more pronounced with time. Until about 22 years after exposure, the risk is about the same for both groups. Later, the women who took DES are at a progressively greater risk, with highest risk at age 60 or older.

Are there any symptoms that DES-exposed daughters should be aware of?

When should someone whose mother took DES during pregnancy be examined by a gynecologist?

A DES daughter should go to a doctor or a clinic with experience in DES screening. It is recommended that examinations be started.

The time to go is:
• After she has started her first period

• If she has any unusual vaginal discharge or irregular bleeding.

What kind of examination will the doctor do?

Make sure you are going to a doctor who is working with other DES daughters, because some DES-caused changes may not show up in the usual examinations or Pap smears given by most doctors. The special techniques are quick, inexpensive, and not painful. The examination should consist of the following:

• A careful inspection of the vagina and cervix, looking for physical differences

• A gentle examination to feel the walls of the vagina

• A four sided Pap test, called a quadrant Pap test, lightly scraping the walls of the vagina to get cells which will be studied under the microscope

• Staining the vagina and cervix with iodine. Normal tissue stains brown; tissue with adenosis does not.

What if the doctor finds abnormal tissue in the vaginal lining?

The doctor may do further tests or send you to a special clinic for more tests. They may include

• Looking at the tissue of the vagina with a colposcope. Photographs of abnormal tissue can be taken, and changes can be watched over a period of time.

• Taking tiny samples of tissue from the vagina as a biopsy to be sent to the laboratory and viewed under a microscope. This can be done in the doctor's office and involves little pain. You may have some slight bleeding.

What kind of treatment will usually be necessary?

If the pathologist finds no clear cut cancer (and, as explained previously, chances of his finding it are slight) but only finds tissue abnormalities as noted earlier (eversion, adenosis, or rooster's comb), no treatment will be necessary.

How often does a DES daughter have to visit the doctor?

What if the doctor recommends preventive surgery for adenosis due to DES exposure?

If the physician's examination shows that the DES daughter is free from cancer, but he suggests surgery for preventive reasons, without question you should get another opinion. Preventive surgery in these cases has been practiced in some areas, but doctors who have treated many DES patients feel that this surgery is unnecessary unless it is proved that cancer is present. This is particularly true since it now seems that adenosis and other benign abnormalities are diminishing with maturity.

What is the treatment if cancer is found in a DES daughter?

Removal by surgery or radiation therapy is the usual treatment depending, naturally, upon where the cancer is situated. Cancer of the vagina or cervix is not a happy prospect for anyone, and especially not for a young woman when it may mean that she will not be able to bear children. However, the cancer may be cured, especially if detected early. All efforts should be made in such cases to find the most experienced doctor for this surgery. Should the mothers who took DES take any special precautions? Yes. They should have an annual pelvic examination including a Pap smear. The examination should also include breast palpation. In addition, monthly breast selfexamination should be practiced by the DES-exposed mothers and any abnormal findings reported promptly to the doctor, since DES-exposed mothers appear to be at an increased risk of breast cancer.

Should a DES-exposed mother have routine mammograms?

Should a DES mother take estrogens?

Before taking any estrogens such as birth control pills, the morning after pill, or estrogens for menopausal symptoms, a DES mother should discuss the risks and the benefits with her doctor. Taking more estrogen in any form may add to the risk of cancer.

What recommendations are there for examinations for DESexposed sons?

• Young boys and men exposed to DES should be advised to have a physical examination by a urologist to tell whether they have any abnormalities associated with DES exposure, such as underdeveloped or undescended testes.

• Underdeveloped or undescended testes need to be treated. Even in men who have not been exposed to DES, these conditions are well recognized as being associated with testicular cancer.
Writer Dr. S.N White Time: July 08, 2020
Email ThisBlogThis!Share to TwitterShare to FacebookShare to Pinterest
Labels cancer, cancer drugs, Des, des and cancer, Des cause cancer, DES type drug, Diethylstilbestrol, dysplasia, estrogen drug Des