Are most tumors of the lip cancerous? Does lip cancer metastasize?

No, most tumors on the lips are benign. They are usually warty growths or tumors of the blood vessels. Most of these can be cured by one of several methods: cutting them out and stitching the cut edges together, burning them with an electric needle, freezing them, or treating them with x-ray.

Do benign lip tumors ever turn into cancer?

Sometimes. Warty growths have a tendency to become cancerous and should be removed.

Where does cancer of the lip occur most commonly?

Lip cancer usually occurs on the lower lip, in men between the ages of 60 and 70. Chapping, overexposure to sunburn, and smoking (especially pipe smoking) are thought to be factors in developing this cancer. Cancer of the lip is fairly common and usually highly curable, especially if there is no involvement with the lymph nodes in the neck. 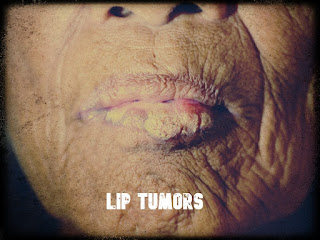 How is lip cancer treated?

Sometimes surgery is used, usually a procedure called a V-lip excision. Sometimes radiation therapy is used, especially for larger cancers. Very large lip cancers are usually treated with radiation therapy because major reconstructive work would be necessary after surgery. Lip cancer, because it is slow growing and visible, is usually discovered in the early stages. It often takes lip cancer months to spread to the lymph nodes in the neck. 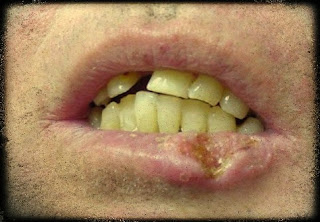 Will I have disfiguring scars after a partial removal of the lip?

The lip regains almost normal appearance, even after large sections of it have been taken out.

How is the reconstruction done if surgery is performed on a large lip cancer?

Usually the reconstruction is done with the use of a skin graft taken from the forehead.

What is a lip shave?

A lip shave removes the mucous membrane on the lip. It is usually performed as a preventive measure for persons who have extensive leukoplakia (white patches) on the lower lip even if the patches are not cancerous.

If the biopsy shows that the lymph nodes are involved, a neck dissection may be performed on the involved side!