What are non cancerous skin diseases

What are non cancerous skin diseases

What are the major things I should be checking?

You might notice a pimple or a small sore that hasn't healed or disappeared but instead is gradually growing bigger. Or you may have had a skin lesion for many years which has started to grow or become irritated. As noted before, any pale, waxy, pearly looking lump which eventually becomes an open sore or any red, scaly, sharply outlined patches should be seen by a doctor.

Moles which change in appearance or size are especially important to watch. Go to the doctor at once if any red, white, or particularly blue specks appear in a long standing mole. Moles that are a uniform bluish black, bluish gray, or of uneven surface also should be looked at by a doctor. If the mole begins to bleed, becomes darker in color, or has other tiny dark spots appearing in the skin around it, it may have become a malignant melanoma a condition which will be discussed later in this chapter. You should remember that any sore, blister, patch, pimple, or other skin blemish that does not heal in 2 to 3 weeks should be seen by a doctor. 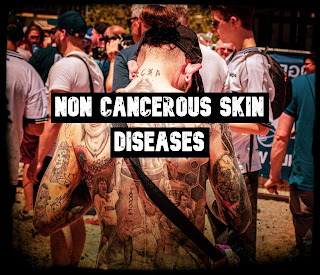 Can skin cancer spread to other parts of the body?

Yes, skin cancer is still cancer, and although it grows slowly and usually doesn't metastasize, if it does spread to the structures beneath it, extensive and sometimes disfiguring surgery may be necessary. As with all cancer, the best safeguard against it is early treatment.

An abnormal skin condition that tends to become cancerous at a later date is referred to as precancer. The most common are senile or actinic (sun-ray) keratosis and hyperkeratosis. Since they tend to become malignant, these precancerous conditions should be checked regularly.

Keratosis is a scaly skin thickening which develops in a small area, usually on the face, neck, or hands. It usually develops in older persons whose skin has been exposed for many years to the ultraviolet rays of the sun. In older persons it is referred to as senile or actinic keratosis, and this variety frequently occurs on the unexposed parts of the body such as the chest, back, or arms. There are several varieties; some are benign, but some may become cancerous and should be checked by the doctor regularly.

This is a condition, resembling keratosis, which occurs as a white thickening on the lip or tongue or in the mouth. It frequently occurs in heavy pipe smokers and tobacco chewers.

This is a precancerous condition that appears as a scaly patch or small scab of the skin in a sharply limited, usually small area. Hyperkeratoses are usually caused by exposure to direct strong sunlight and to hot drying wind. They are nearly always found on the face, neck, and hands.


What is Bowen's disease? Is it a kind of skin cancer?

Yes. Bowen's disease is a rare form of skin cancer. It often occurs in several primary sites. The growth is reddish pink and raised, with scaling. It usually occurs on the unexposed areas of the skin. Some doctors regard it as a precancerous condition. Sometimes it is associated with internal malignancies.

This is an unusual skin lesion which appears in a sunexposed area and may grow rapidly to substantial size over a short period of time. It is usually a smooth, red nodule, sometimes with a central umbilical spot, which is often difficult to distinguish from other skin cancers.

Keratoacanthomas do not metastasize, but careful diagnosis is important because they are similar in appearance to squamous cell carcinoma, which can metastasize. A biopsy is needed to determine the cell type.


What is sweat gland cancer?

It is a very rare kind of cancer that may metastasize to the lymph nodes or to distant sites. It can originate from any gland but usually occurs near the anus, eyelids, ears, armpits, and scrotum.

Xeroderma is an inherited condition. It is thought to be a precancerous disease. The skin is irregularly pigmented and scaly and later becomes thin, ulcerated, and scarred. It is strongly sensitized to sunlight, and cancer occurs on the areas which have been exposed to it, even briefly.


What is a lipoma?

Lipomas are not cancerous. They are soft, fatty tumors that lie directly beneath the skin. They are the most common tumor in the body. They can be small like a pea or as big as a grapefruit. You can find them almost anywhere on the body. Usually they are underneath the skin of the trunk or the neck or on the arms and legs. They feel soft and move freely under the skin. They are usually not firmly attached to surrounding structures. If they are somewhere where you can see them or if they show signs of growth, the doctor might remove them for cosmetic reasons. Removal is usually done in the hospital. However, they are usually not removed. They do not cause pain and rarely become cancerous. If they do become malignant, they will show rapid growth and the feel of the tissue will change.


Do warts ever turn into cancer?

No. Warts do not turn into cancer.

Hemangiomas are usually nonmalignant. They are bloodvessel tumors of the skin. They may appear at any time from birth to old age on any part of the body. They look like red spots on the skin and can be anywhere from the size of a pinhead to the size of a nickel. Sometimes they bleed if they are in an area which gets irritated, such as a man's face. Most of them are harmless and do not grow. They very rarely become malignant. Doctors usually do not remove them unless they are unsightly.


What is a ganglion?

A ganglion is not a cancer. It is a thin walled cyst which appears in the tendons or joints. It is filled with a colorless, jellylike substance. Ganglions are usually seen on the inside wrists of children and young adults.


What is a sebaceous cyst?

Sebaceous cysts, or wens, are thin walled sacs which contain a soft cheeselike material. The openings of the glands which secrete oils into the skin (sebaceous glands) get clogged and the cysts develop. They can be the size of a nut or get as big as a plum. Usually you find them on the scalp, on the upper back, behind the ear, or on the neck and face.


Do sebaceous cysts turn into cancer?

These cysts rarely turn into cancer. Those which are stable in size usually are left alone unless they are located in areas where there is constant or repeated irritation. When cysts increase in size over a period of weeks or months, they are usually removed. Sometimes they become infected and are treated with warm wet packs or antibiotics or, if needed, with incision and drainage. These cysts can be removed in the doctor's office or in the hospital.


What is a fibroma?

Skin fibromas very rarely become cancerous. They are small, hard lumps about the size of a cherry pit. They are quite common and sometimes are referred to as fibrous tumors. They are not usually removed. Another type, pedinculated fibromas, little tags that dangle on stalks from the skin, are common on necks and armpits and are usually treated by electrocautery.


Are there any other skin conditions which are not cancerous?


Can a tattoo cause skin cancer?

No, a tattoo usually does not cause cancer. However, if there is itching or bubbling around the edges, it should be checked by a doctor.


How can I tell whether or not a growth is cancerous?

You cannot. You should bring any skin change to the attention of your doctor. Only a physician can determine the nature of an abnormal skin growth whether it is benign, precancerous, or malignant.


Can a doctor tell just by looking whether or not a growth is cancerous?

An experienced doctor can tell when a growth looks suspicious and will order a biopsy to make a definite diagnosis. The doctor will take out the entire lesion if it is small, or if it is large he will take a small wedge of it for the biopsy. As with all cancers, the only way the doctor can be sure whether or not a growth is malignant is on the basis of a biopsy, in which the cells are examined under the microscope.


How does skin cancer spread?

Basal cell and squamous cell cancers typically spread by sending out tentacles through the surrounding tissues. Although these kinds of skin cancer may be destructive locally, they seldom metastasize or spread to bones, lungs, or other organs.


Should all growths on the skin be removed?

No, most growths on the skin need not be removed.

They should be seen by a doctor if

• They show a change, such as increase in size

• They are being irritated by something such as a bra strap, a belt, shaving, etc.

What are skin cancers?

Should all skin growths which are cancerous be removed?

Yes. They should be treated with some kind of therapy.


Are any tests other than a biopsy needed for skin cancer?