How long does it take for lung cancer to spread

How long does it take for lung cancer to spread

How does lung cancer spread?

Lung cancer usually begins as a tiny spot, most often on the inner lining of a bronchial tube. Lungs have a rich supply of blood and lymph vessels close to the cancer cells. If these cells get into the bloodstream or the lymph system, they can act as seeds and spread to other parts of the body. When this happens, it is called a metastasis. A metastasis (or "met," as it is sometimes called) is not a new kind of cancer, but is the lung cancer which has moved to another part of the body and begun to grow there. Therefore, even if it has spread to the bone, for example, it is not bone cancer but simply an extension or metastasis of the lung cancer. The metastasis looks and behaves in the same way as the original lung cancer, and therefore the same treatment which has been used to contain the lung tumor is likely to be used in treating the metastasis. 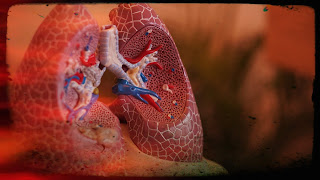 How does the original lung tumor affect the lung?

There can be several effects on the process of breathing. As the tumor on the lining of a bronchus or bronchiole grows, it may interfere with the flow of air through the breathing tube and cause a wheeze or whistling noise as the air passes through the narrowed part of the bronchus. Or the tumor may cause a cough as it obstructs the upward movement of mucus. Sometimes it makes an already existing cough worse or, because it is bleeding, produces bloodstreaked sputum (mucus and/or pus coughed up from the bronchial tube).


How Long Does It Take For A Lung Cancer Tumor To Grow?

Are tumors of the lung ever found to be benign?

Benign tumors (adenomas) do occur but they are rare. Prior to surgery they are difficult to distinguish from cancerous tumors and are therefore treated in the same manner.


Are most cases of lung cancer operable?

No. About 50 percent of all cases of lung cancer are inoperable.


What if the tumor has spread outside the lung? How does it affect other parts of the body?

Sometimes fluid accumulates in the space between the lungs and the ribs. This can cause chest pain and make it hard to breathe. A tumor growing between the two lungs may press on the esophagus and make it hard to swallow. It may affect the nerves that go to the voice box and make you hoarse. When it grows in one of the smallest bronchial tubes, it may not have any effects that you notice.


When should I have a cough investigated to make certain it isn't something more serious?

It is wise to investigate the source of any cough that lasts for more than 2 or 3 weeks. This rule goes for the cough that hangs on after a chest cold or for the cough of chronic bronchitis even though you have had it checked before. A cough, or a change in cough habit, is found in most lung cancer patients at some time during the course of the disease. The tumor seems to act like a foreign body or obstruction within the lung, and the cough represents the effort to expel it. 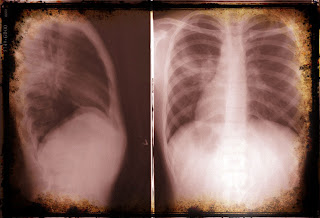 Are there any other symptoms I should be looking for?

Other signs which are fairly common in lung cancer are vague chest pains, a faint wheezing sound in breathing, or blood streaked sputum. Chest pain is the second most common symptom. It is usually felt as a persistent ache unrelated to a cough and is commonly experienced on the side on which the tumor is located. Faint wheezing is fairly common at a relatively early stage. It is not necessarily constant. Blood streaked sputum is a first symptom in a small percentage of cases. However, even small amounts of blood in the sputum fine streaks, for instance must be regarded seriously. Its appearance, even once, should always be reported to the doctor. Coughing up blood, either in flecks or streaks, occurs in over half the patients with lung cancer.


Can arm and shoulder pain be a symptom of lung cancer?

Yes. One type of lung cancer, known as a superior sulcus tumor, is sometimes incorrectly diagnosed as cervical arthritis or bursitis because of arm and shoulder pain symptoms. The tumor is located in the upper part of the chest and usually extends into the adjoining ribs and spine, producing shoulder and arm pain, sometimes extending to the forearm and the fourth and fifth fingers. An x-ray of the chest, with special attention to the superior sulcus area, helps to determine whether this tumor is the cause of shoulder and arm pain.


How much time does it take for symptoms of lung cancer to show up?

Lung cancer is fairly slow growing and it ordinarily takes about 20 months from the time the tumor becomes visible on an x-ray to the appearance of the first symptom. And that symptom is usually a change in the character or severity of a chronic cough. Unfortunately, what happens all too often is that the patient usually waits 2 or 3 months before seeing a doctor and then another 3 or 4 months go by before treatment is started, thus compounding the problem.


Who are the people most likely to get lung cancer?

People most likely to develop lung cancer are between 50 and 70 years old and have smoked almost all of their adult lives.


Is it true that lung cancer in women is on the increase?

Yes. With many more women smoking than ever before, the number of women with lung cancer has increased at an alarming rate, so that smoking is now responsible for 75 percent of all lung cancers in women. The cancer rate for female smokers is 67 percent higher than for nonsmokers.

Do industrial pollutants cause lung cancer?

Studies being supported by the National Cancer Institute show that occupations and environmental factors may play a role in the development of lung cancer. Persons who have been exposed frequently and for many years to irritating substances (such as asbestos, chromium compounds, radioactive ores, nickel, arsenic, and uranium) in the air they breathe in an industrial plant are thought to have a somewhat greater chance of developing lung cancer. A worker in these kinds of industries who smokes faces an even greater risk. If you are over 40, smoke two packs a day, and or are in an occupation that is thought to be cancer producing, you should have frequent medical checkups.