How do you know if you have kidney cancer? - Medical Questions

How do you know if you have kidney cancer?

How do you know if you have kidney cancer?

What is the function of the kidneys?

There are two kidneys, one on each side of the back portion of the abdomen, located rather high in the loin. Their function is to filter waste products from the blood, returning to the circulating blood those substances that are necessary for normal chemical balance. They.central portion of each kidney is hollow and receives the body fluids. The urine leaves the kidney and passes down its ureter a long tubular structure which connects with the bladder. 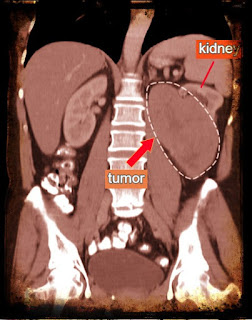 What are the symptoms of kidney tumors?

Four symptoms can warn the patient of the possibility of kidney tumors: persistent pain in the area over the kidneys, either in the back or along the side of the body; blood in the urine; a feeling of a lump or mass in the kidney region; and fever or weight loss.


What Are Some Symptoms of Kidney Cancer?

Are all kidney tumors cancerous?

No. Many are benign. The benign growths often are filled with fluid and can be classified as cysts. They vary in size. However, malignancy cannot always be determined without surgery.


How is cancer of the kidney diagnosed?

The doctor will usually assess kidney and bladder function with an intravenous pyelogram. Blood studies will be made to reveal the presence of anemia. Urinalysis, renal arteriography, and scans are sometimes recommended. Because cancer of the kidney is difficult to diagnose, it has been labeled the "internist's tumor".


What symptoms are indicative of tumors of the ureter?

Usually blood in the urine, pain in the flank, and finally obstruction to the flow of urine to the bladder. This is an uncommon form of cancer and usually necessitates the removal of the kidney on the same side as the affected ureter.

Can one live normally if a kidney is removed?

Fortunately, people can live perfectly normal lives with only one healthy kidney.


What is kidney removal called?

The medical term is nephrectomy, and it is considered a major operation.


Are nephrectomies done only for cancer?


What kind of incision is made for this operation?

The incision extends from the loin, just below the last rib and above the hipbone, around onto the abdomen.


What anesthesia is usually used?

General anesthesia is usually used for this operation.


Are other treatments besides surgery ever used for cancer of the kidney?

Sometimes, a course of radiotherapy will be done before surgery. Postoperative radiotherapy, chemotherapy, and immunotherapy are being used in some hospitals in addition to surgery. The use of a biological response modifier, called interleukin-2, to activate killer white cells has shown some response in people with renal cell cancer. This investigational treatment is presently in preliminary trials.


What is adrenocortical cancer?

It is cancer of the outer layer of the adrenal glands, which are located near the kidneys. This rare cancer usually occurs in adults and is often curable when detected at an early stage. Since the majority of adrenocortical tumors do not secrete steroid and/or sex hormones, tests for hormone levels play an important role in diagnosis, treatment, and follow up. Treatment consists of surgery followed by hormonal treatments. Sometimes chemotherapy is given for more extensive disease.