Aneurysm of the Aorta

The possibility for correcting abnormalities of the major blood vessels is one of the major advances of the post World War II era. This is true not only because of new techniques but because suitable prosthetic sterile material is now available to substitute for diseased blood vessels. Modern refinements in X ray have made it possible to visualize diseased arteries for diagnosis and as an aid in planning reconstructive operations. These techniques have been so well developed that all major hospitals should be familiar with them. Thirty years ago the diagnosis of an aneurysm of the aorta meant that the patient would not be expected to survive more than twenty four months. Today early surgery for this disease is done with no greater risk than for other major abdominal operations. 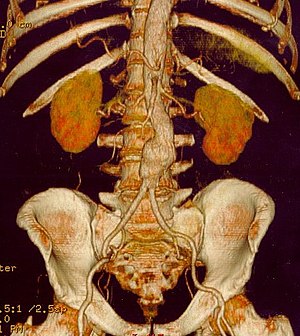 What is the aorta?

The aorta is the largest and longest blood vessel. It carries blood from the heart to the rest of the body and has branches that extend to each of the organs and body parts.


What is an aneurysm?


What is the cause of it and why is it so serious?

Most . aneurysms are due to arteriosclerosis, but an aneurysm can result from an injury or an infection in the artery wall. It's serious if the blood in the aneurysm clots and closes off the aorta or if the pressure in the artery thins out its wall so much that the aneurysm is in danger of rupturing the wall. In the former instance the blood supply to the viscera and legs is diminished; in the latter situation the individual can exsanguinate.


Do these occur only in the aorta?

All arteries can be so weakened that they become aneurysmal. This disease is also frequent in the artery behind the knee and in the thigh, in which case the blood supply to the leg is jeopardized. Those at the base of the brain can be the source for brain hemorrhage.


Can this disease be prevented?

If the disease is due to arteriosclerosis, there is no way of preventing it. Einstein died of an abdominal aneurysm at a time before the surgery for this problem was well developed. However, when the aneurysm results from syphilitic infection, the disease occurs in the part of the aorta that is in the chest. It can be prevented by early adequate treatment of the primary disease.


How do you make the diagnosis?

It is usually possible to feel the abnormally pulsating artery in the abdomen near the area of the navel. The X ray will verify its presence. Verification is needed because sometimes, especially in a person with high blood pressure, the strong pulse in the aorta may be caused by something else.


What is the treatment?

The only treatment is surgical. No medical or other method affects the diseased artery. The operation entails removal of the diseased part of the artery that has the aneurysm and then connection of the upper and lower ends by means of a plastic tube graft. The tube is made of the same dacron used for clothes, only the material has a more closely knit weave. With the tube, the blood will flow normally.


When is the operation absolutely necessary?

If the aneurysm is in danger of rupturing, surgery should be done immeditely. There is no alternative. An operation done before complications can be satisfactory in eight out of ten people. If an emergency operation is required because of rupture, only three to five people of these same ten can be expected to do as well. The doctor suspects that the wall of the artery is thinning out and is in danger of bursting open if it produces backache and if it is judged to be more than three and one half inches in size. The patient in this stage of the disease requires prompt attention.


When is the operation not necessary?

If the aneurysm is small and the patient has no symptoms referable to it, then it is safe to observe him. Some aneurysms never get to the dangerous stage.


What will happen if the operation is not done?

The realistic answer is that if the artery ruptures, the operation at that time is five times as risky as before, and if no operation is done, the patient will not survive. One can't wait until the last minute to make a decision.


Aortic Aneurysm: What is it and how is it treated?

What does the difficulty in walking have to do with this aneurysm?

They are related in that both are due to arteriosclerosis. Sometimes the clot in an aneurysm breaks off and blocks the circulation to the legs.


If I recover from the operation, how will I be then?

If the graft is inserted properly and the patient recovers, he will be just as he was before but without the lifethreatening danger of the diseased aorta.


Will you treat the diseased gallbladder, ulcer, appendix or prostate at the same time?

No, it is not wise to expose the contents of the intestine or of infected organs to the area of blood vessel sutures. Infection of a graft is a most serious complication. Therefore, surgery is limited to the correction of the diseased aorta and collateral vascular problems.