What is the best treatment of hemorrhoids? - Medical Questions

What is the best treatment of hemorrhoids?

What is the best treatment of hemorrhoids?

Hemorrhoids are varicose veins of the anus. The lump at the external opening is a distended vein. The cause of hemorrhoids has not been truly established, but there are a number of associated considerations. They are probably related to the upright posture; four legged animals do not get this disease, although it is seen in baboons. Hemorrhoids often appear temporarily with the increased intra abdominal pressure of pregnancy and in some very constipated individuals who strain at stool. Yet many individuals in these categories don't get them. There is definitely a familial inherited predisposition to them, as there is in varicose veins of the legs. 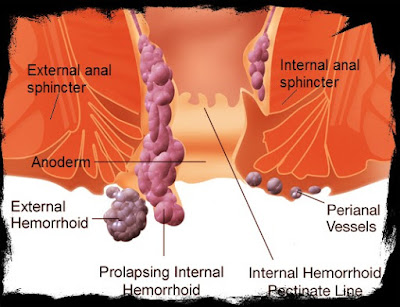 The patient usually comes in aware of protrusion and has often made his own correct diagnosis. Where the patient's judgment is wrong and he waited a long time for spontaneous recovery, the delay can be of consequence. Not all lumps about the anus are hemorrhoids, and hemorrhoids are not the only cause of bright red blood in the stool and in the toilet bowl. When the patient makes an appointment for a consultation about hemorrhoids or rectal bleeding, he is told to take a laxative the night before the examination and a cleansing enema in the morning. This cleanout must be done in preparation for an examination of the anus and rectum.


What else could it be?

I do have these hemorrhoids sticking out. You do have hemorrhoids. I want to be sure that you do not also have a tumor or an inflammation of the lower intestine.


The hemorrhoids stick out and cause some moisture and itching. Can this be relieved? Does it require surgery?


I see blood in the toilet bowl. Should these hemorrhoids be removed to stop that bleeding?

The examination in the office is normal except for the hemorrhoids. However, even when hemorrhoids are present, the bleeding can still be coming from elsewhere in the intestine. Before a final decision is made, you should have a barium enema X-ray examination of the lower intestine. After that is done, you'll return for another examination of the area. The surgeon will make a final decision when all this information is available.


What is sigmoidoscopy? Why do you want to give it to me?

Sigmoidoscopy is a method of directly inspecting the anus, the rectum and lower colon. This examination, done in the office, takes only a few minutes and is completely painless. The findings tell whether the hemorrhoids are the cause of the trouble or whether there is something else somewhat higher up.


Suppose you find something higher up? Will you do something about it now?

Yes. If you have a small polyp, it can be removed at the time of the sigmoidoscopy. If there is a tumor, a piece of it (biopsy) can be extracted for microscopic examination.


Should bleeding hemorrhoids be removed?

What is an external hemorrhoid?

This term is used to designate the flabby protuberant piece of skin that lies over a soft compressible hemorrhoid. This piece of skin can swell, be hot, itch, and be very sore. It interferes with walking and sitting. Usually it gets better if properly treated by local applications.

This time it's different. The hemorrhoid is sticking out, it is sore, very tender, and I can walk only with difficulty.

What you have is a thrombosed external hemorrhoid. A clot has formed in the vein that is sticking out. It is exceedingly painful. This can be taken care of in the doctors' office with a local anesthetic and a small incision to remove the clot. You will get almost instant relief.


When should hemorrhoids be operated on?


What do you do in the operation? What result should I expect?

Both of these complications, a too tight and too loose opening, can occur. But they seldom happen if both the operation and postoperative care are carefully carried out.

What about infection treatments?

The assumed advantage of this office treatment method is that it can be done without going to the hospital and without a major anesthetic. This advantage is sometimes offset by the fact that it is often an incomplete procedure. Injection treatments should be done only in carefully selected cases where the hemorrhoids are small and do not protrude and where there is no infection. If the treatment for bleeding is not effective after three injections, each given in a different area at weekly intervals, then it should be abandoned. The injection method can be accompanied by complications.

My job is selling; it requires sitting and walking. If I'm operated on, when can I go back to work?
It takes seven to ten days to be able to get back into full harness. In some people, where the procedure is simple, it is possible to return to work in three to five days. It is best to count on one week.


If this slimy thing sticking out is not a hemorrhoid, what is it?

This is a prolapse of the rectum. A physician speaks of prolapse as a condition in which part of an organ has fallen down or has fallen out of place. In this instance it represents a type of hernia or muscle relaxation and weakness such that the supportive tissues are no longer able to maintain the rectum in its normal internal position. The condition is often seen in childhood; it usually corrects itself. In adults minor degrees of prolapse of the rectum can be part of protruding hemorrhoids. However, this marked "sticking out of the rectum" is a disease independent of hemorrhoids.


What should be done about rectal prolapse?

Some degree of prolapse may occur with hemorrhoids, and that type is alleviated by removing the hemorrhoids. Large prolapses can be a real disability because the area is moist from the uncontrolled leak of mucus. The condition is most common in the elderly, who are already burdened by other more vital disabilities. If you can get along with it, that's fine. In the senior patient in whom this is so often encountered, it may be advisable to do nothing surgical, even though he may require a pad in a diaper or menstrual like arrangement to collect th emucus secretion. In the good risk patient an abdominal suspension operation will satisfactorily correct the situation.