What an ultrasound can detect? Can you see cancer in the abdomen with ultrasound? - Medical Questions

What an ultrasound can detect? Can you see cancer in the abdomen with ultrasound?

What an ultrasound can detect? Can you see cancer in the abdomen with ultrasound?

It is one of the newer methods used to locate and measure solid tumors in the body. Ultrasound, or sonar, was used extensively during World War II for tracking submarines. Today it is used to clean teeth, age alcohol, and prospect for oil. It has been adapted for medical application and is a common technique for watching the heart in motion and for examining unborn babies. 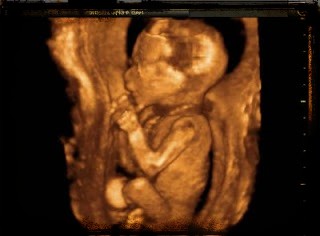 How does ultrasound scanning work?

It works just like sonar. If a destroyer captain wants to locate a submarine, he sends bursts of sound through the water around him and waits for some of them to bounce off his target. By analyzing these echoes, he can tell where the submarine is and how large it is. An ultrasound technician, or sonographer, uses exactly the same principle.


How is ultrasound scanning done?

The technician presses a microphonelike probe across the patient's skin. This probe is called a transducer. The probe sends out sound waves at 1 million to 10 million cycles per second. When the probe picks up an echo, a dot registers on the screen (called an oscilloscope screen). The probe sends out sound waves 0.1 percent of the time it is on and listens 99.9 percent.


How can ultrasound tell a solid tumor from one that is not solid?

As the technician moves the probe across the skin surface, a composite picture emerges on the screen showing what's inside the body. A solid tumor looks solid on the screen because echoes are returning from all the particles inside it. But a cyst filled with fluid looks hollow, because fluid doesn't reflect ultrasound waves. The technician can make a permanent record of the picture with a special camera attached to the oscilloscope. 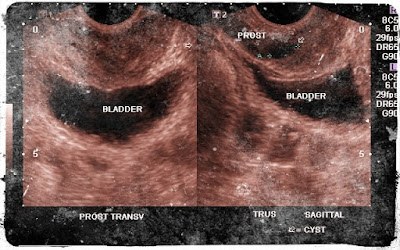 Can ultrasound tell the difference between a malignant tumor and a benign one?

No. Ultrasound can confirm that the mass is a tumor. It outlines it and shows the extent of it. But an ultrasound machine that by itself can distinguish a malignant tumor from a benign one has yet to be invented. A doctor, by looking at the shape and consistency shown by ultrasound and combining it with the clinical history of the patient, can say that a tumor is "highly suspicious" of being cancerous.


Does the patient have to make any special preparation for an ultrasound scan?

No. You will be put on an examining table. Your skin in the area to be scanned will be covered with mineral oil in order to eliminate most of the air gaps that block sound transmission. You need no anesthesia and you will feel no pain. The ultrasound scan itself takes only a few minutes to perform, especially if it is being done on one small area of your body.


What are the advantages of ultrasound scanning?

With ultrasound, you have no radiation exposure. You need no incisions or injections. You do not have to swallow any substances. There is no discomfort. Ultrasound can be used many times on the same patient without side effects, as far as is known, even to pregnant women. Studies to date have revealed no known biological damage to humans from diagnostic exposure to ultrasound waves, although it is a form of energy being transmitted through tissues.

The procedure has been around for many years. In the past it was used mainly for obstetrical tests. Since 1970, there has been a dramatic change in its use in the United States. Now ultrasound is being used for the whole pelvis, and about two-thirds of the scans now being done are in the abdominal area. It is a field which is changing with new technology being introduced. However, there is a limited number of doctors who know how to use and interpret the tests accurately.


Is ultrasound being used in other areas besides diagnosis?

Yes. Ultrasound experts can measure a tumor's progress during therapy whether it is getting smaller as a result of chemotherapy or radiation treatments. It can be used to tell the doctor whether or not the treatment is working. It is thought to be a good monitoring device because it can be used often, since there is no radiation involved. Ultrasound may be used to help the doctor more accurately aim radiation during treatment. It is also used as a guide for operations. Sometimes it is used during an operation to help determine the size, number and location of tumors.


What kinds of tumors are being diagnosed with ultrasound?

Ultrasound scanning has proved to be helpful in diagnosing tumors of the stomach, pancreas, kidney, uterus, and ovaries. It has helped detect tumors of the eye and thyroid gland. In the thyroid area, it acts as a complementary test, mainly to estimate the size of the lesion. It is sometimes used in breast cancer, especially to scan young, dense breasts. It can actually differentiate between fluid or solid tumors in about 98 percent of the cases.


How is ultrasound used in the gynecological area?

This is where the use of ultrasound began. It can be used in the urinary area. In the ovarian area, it can detect whether the tumor is cystic, partly cystic and partly solid, or all solid.


How is it used in liver and pancreas areas?

Ultrasound is useful in scanning the pancreas, especially in thin patients. In the liver, ultrasound scans are often used when a patient is jaundiced since it can help to differentiate between normal consistency and pancreatitis. However, it cannot tell the difference between pancreatitis and cancer of the pancreas. Small tumors of the pancreas can be discovered by ultrasound.


Is ultrasound useful in the chest area?

No, ultrasound has not been found to be useful in this area.


Is ultrasound used for detecting cancer of the kidney?

Ultrasound can be used for a more definitive diagnosis after IVP (intravenous pyelogram) testing is done. It can help differentiate between solid and cystic kidney masses.


Do ultrasonic scans give different information than standard x-rays?

Although ultrasonic scans can be used as a substitute for xrays for certain kinds of examinations, they generally yield different types of information, so often both ultrasonic scans and x-rays are ordered. They are complementary tests. The boundaries between different types of soft tissue can be highlighted with ultrasonics, for example, and the characteristics of blood flow can be studied. However, for viewing structures such as bones, x-rays are presently preferable.


What happens in an Ultrasound scan?


Can ultrasound be done on an outpatient basis?

Yes, it can. However, in many of the major centers which have the scanning equipment, inpatients take preference over the outpatients for use of the machine.