How is chemotherapy given? Is Chemotherapy is painful? - Medical Questions

Chemotherapy can be given

• Orally, by mouth, in pill, capsule, or liquid form (PO)

• Intravenously, either injected into a vein as a shot (IV push) or as a fluid drip (IV or IV drip)

• Intramuscularly, by injecting it into a muscle in the arm, buttocks, or thigh (IM)

• Subcutaneously, with an injection beneath the skin (SQ)

• Intra arterially, by injecting it into an artery (IA)

• Intrathecally, by injecting it directly into the spinal fluid (IT)

• Intracavitarily, by injecting it into the pleural space (lung) or into abdomen (for fluid accumulation) 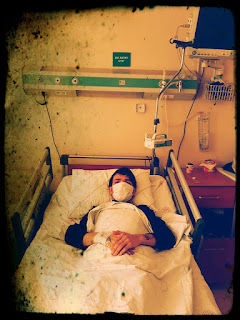 How is the method of administration decided?


Can drugs be given directly into the bloodstream without putting the needle into your vein each time?

There are several different ways this can be done, especially for people who need to have drugs or other fluids injected often into the bloodstream. The doctors may insert an indwelling catheter, implant a drug delivery system or use a pump to give the drugs.


How does the indwelling catheter work?

The doctors insert one end of a catheter a thin silicone rubber tube into a larger vein or artery deeper inside the neck, chest or abdomen. The other end comes out through a small incision in the skin. Drugs or fluids are injected or infused through the end of the catheter and then go directly into the bloodstream. This device can be left in place for days, weeks or even months.


How is a drug delivery system inplanted?

The system is placed completely under the skin, usually on the chest. It consists of two parts a portal, a small stainless steel chamber, and a catheter, a thin flexible rubber tube. One end of the catheter is placed in a vein or artery inside the body and the other end is firmly attached to the portal with a special lock. The operation takes from 30 minutes to an hour. Both parts of the system are placed completely under the skin. There is no permanent opening. Drugs and fluids can be put directly into the bloodstream through a simple injection through the skin.


Can pumps be implanted to give chemotherapy drugs?

Physicians at a number of hospitals are using infusion therapy as a treatment. This method, known as intra arterial infusion, uses either an external or internal pump to give the drugs. It delivers high concentrations of the drug to a specific target unlike the intravenous (IV) infusion, which distributes the drug throughout the entire body. An external pump can be used, but it restricts the person's activities.


How does the internal pump work?

The size of a hockey puck, the internal pump is like a balloon that is sensitive to pressures within its own walls. The pump is implanted in the body. The drug can be delivered at an even rate over time. Since the pump is inside the patient's body, the patient can carry on normal activities. When the drug supply is used up, it is refilled by injecting more drug through the skin into the pump. The pump is being used for liver, head and neck, and brain tumors.


Is Chemotherapy is painful?

It depends upon where and how it is being given. If you are taking it in pill, capsule, or liquid form or applying it as an ointment, it is no different from taking any other medicine in the same form. If you are getting a drug which is injected into the muscle, it is like getting a vaccination or penicillin shot. You usually feel a pinprick. If you are taking a drug which needs to be injected in the vein, the process takes longer than the muscle injection but does not usually involve pain. It is similar to having blood drawn for a blood test. A needle is put into the vein under the skin and the drug is pushed in or drips into the body from an intravenous setup. The time of the whole procedure varies from 2 minutes to 1 or 2 hours. Some people having certain drugs injected say they feel a temporary burning sensation in the area of injection. Others feel warmth throughout the body. Some patients say the needle insertion hurts. With a few drugs, extreme care must be taken when they are administered intravenously.


What determines how the chemotherapeutic drug will be given to me?

It depends upon the kind of drug being used, the kind of cancer you have, the extent of the disease, and the location of the cancer. For example, some drugs are given by IV (injection into the vein) because they reach the bloodstream better and thus reach the cancer cells better this way. IV is a way of making sure that the correct amounts of the drugs are carried to all parts of the body where the cancer maybe growing. Some drugs are made only in a form which can be given in one manner.


Does one particular drug ever stop being effective in a particular patient?

Yes, sometimes the drugs lose their effectiveness against the particular cancer. Scientists believe that in some cases the cancer cells are multiplying more quickly than the drug can kill them. Other times the doctors have to reduce the doses or stop giving the drugs entirely because they are producing side effects on the patients. Sometimes the cancer cells have undergone change and are now able to survive and even grow rapidly in the presence of the oncedestructive drug. When this happens the cells are called "drug resistant."


How do cells become drug resistant?

Cancer cells often find ways to avoid a drug's effect and "turn off" its anticancer activity. If that happens, doctors usually try to overwhelm the resistant cancer cells by introducing new drugs or combinations of drugs. Unfortunately, for some reason, cancer cells are often able to resist these new agents as well, even drugs they haven't encountered before or drugs that have different structures and mechanisms of action. Researchers have found that some cancer cells, through genetic changes, "learn" to produce large amounts of an enzyme that overrides a drug's usefulness and allows the cancer to grow again. In other cancers, the cell membrane changes in a way that allows it to block the entry of the drug into the cell or reduce the time the active drug remains in the cell. Some cancer cells show increased amounts of a certain protein on the cell membrane which may influence the way a drug enters or leaves the cancer cells.


What kind of research is being done on drug resistance?

Many studies are being conducted in this field. Researchers have found ways to overcome drug resistance in cells grown in the laboratory. Several of these approaches are now being used on patients in clinical trials. These include different ways of administering drugs, such as alternating treatment with different combinations or injecting the drug directly into a region like the abdomen in order to increase the local concentration of drug delivered to a cancer site.