How is abdominal trauma treated?

How is abdominal trauma treated?

Patients who have suffered accidental injuries are usually seen in the emergency room of a hospital. The presence of broken bones, skin injuries and injuries to the rib cage are usually obvious or immediately diagnosable by X ray. Injuries to the head and the abdomen are more difficult to evaluate. The latter are evaluated by direct examination and feel. Usually, if the abdominally injured patient can be brought to the hospital alive and alert, it is possible to save him. The patient who is dead on arrival probably never stood a chance. Massive bleeding usually occurs from the solid organs, like the liver and spleen, and bacterial peritonitis from the intestinal tract; both areas can be injured by the same incident. 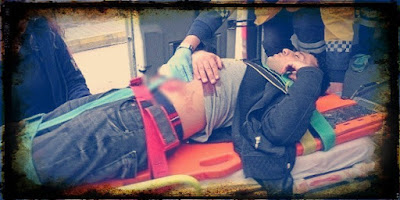 Why do you ask in such detail about how it happened?

Sometimes information about the patient's position, what he was doing, and the direction of the injuring force offers clues as to what may be happening inside. For example, a child who hits the left side of his chest against a tree while sleigh riding down a hill injures the spleen. The same child hit on the right side in front may have injured the liver. This information helps in the diagnostic evaluation.


Why do you advise that an immediate opening be made in the windpipe?

This is called a tracheotomy. If the patient is unconscious, doesn't breathe well, and the secretions in the injured chest are blocking his breathing tubes, a tracheotomy will enable the doctor to suck all the "junk" out of his lungs through a tube, thereby improving his breathing. The doctor will also be able to attach the patient's lungs to a machine that will breathe for him. This operation can be done in a few minutes, in bed, under local anesthesia. While the tube is in, the patient won't be able to talk unless he closes off the air opening with his fingers. This effect is only temporary. As soon as the tube is removed, he'll talk and breathe as before.


What are you examining the patient for?

We are trying to determine whether there is an intraabdominal injury. These injuries are often of two kinds: The patient could be bleeding internally or he could have ruptured the intestine.


How can you tell if there is bleeding inside?

We suspect hemorrhaging by noting a certain abdominal distention and feeling of abdominal tenderness. The blood count can show anemia. If the patient has a rapid pulse, is hungry for air, and his condition has become worse in the last half hour, he may require a blood transfusion. Since he is not bleeding significantly on the outside, one usually assumes that he's bleeding within the abdomen.


How can you tell if the intestine is ruptured?

The abdomen will show signs of severe peritonitis and will have the same feel as a ruptured ulcer or a ruptured appendix. From the examination alone, it is not possible to say what has ruptured but only that something has been torn open.


Why do you want kidney X rays?

This is the only certain way of knowing whether the kidney or bladder has been affected.


What does the broken spine have to do with it?

When the spine is fractured, a great deal of blood accumulates about the injured area, affecting the abdomen and causing virtually the same symptoms as an injury of the intra abdominal soft parts. If this is so, it is not necessary to suspect an intra abdominal injury. It is sometimes not possible to differentiate between the two injuries.


What do you mean by an "abdominal tap"?


What do you mean that it's better to "have a look see"?

Sometimes the findings are so indefinite, the examination and X rays so inconclusive, and the other injuries so severe that the only way to be sure about the abdomen is to operate. In this way the surgeon can see what has been injured and take care of it at the same time.


When do you advise surgery?

If it is suspected that the patient is actively bleeding in the abdomen, surgery takes precedence over almost everything else except simultaneously improving the breathing pathway. Otherwise the transfusion replacement of blood may not be equal to the amount of blood lost and the patient may bleed to death. Surgery to prevent this must be done as soon as possible. If there is a rupture without bleeding, the operation can be delayed four to six hours to put the patient in better condition.

Is it necessary to remove the bullet which shot him?

That is far less important than the injury that the bullet caused. It would be completely satisfactory to leave the bullet where it is, at least for the time being, if it has caused no damage.


What are the chances of recovery?

One cannot say in advance, and it is also a question of how serious the injuries in other parts of the body are. If it is possible to stop all the bleeding and repair all the injured intestine and solid organs in the abdomen, then present methods of preventing infection and of treating the general condition (supporting the breathing and circulation) allow a higher percentage of salvage than has been possible in the past.