How does a lung cancer start? What is a bronchoscopy used to diagnose? - Medical Questions

How does a lung cancer start? What is a bronchoscopy used to diagnose?

How does a lung cancer start? What is a bronchoscopy used to diagnose?

Lungs: CYSTS, TUMORS AND THEIR REMOVAL

An X ray of the chest provides a view of both lungs, an outline of the heart and of the diaphragm muscle, and all the ribs. Such an X ray may reveal changes in the size or configuration of structures or the presence of densities or shadows that are not normal. Modern X-ray techniques and the simplicity of the chest X ray as a survey and routine preemployment procedure taken in the asymptomatic individual can lead to early diagnosis of lung diseases.

Not all spots are tumors. Some are infections, others are defects with which one was born, and still others are benign growths. Unfortunately there is a high incidence of cancer of the lung. All abnormalities disclosed by the chest X ray or brought to the physician's attention by a cough, wheeze or blood spitting require investigation.

Any single abnormality of the lung can be due to a number of causes, either serious or inconsequential. Thus a lung spot may, among others, be a cancer, tuberculosis, an abscess, or an abnormal collection of cells that is of no signficance. In a similar fashion a pneumonialike shadow may be a true bacterial pneumonia or an area of congestion or collapse. The studies performed in the hospital (so called work up) are directed at identifying the specific cause of the X-ray abnormality. A surgical procedure may be required just to make the diagnosis without being a form of treatment in itself. Refinements in anesthesia and operative techniques have made operations on the lung as routine and safe as operations in the abdomen. 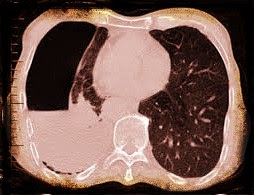 Why do you want an old (previous) chest X ray? Where can I find it?

A previous X ray is needed for comparison. From the previous film alone, the physician can see that this is an unimportant shadow or that it is now important, since it was not there before.

You may find the old film in a preemployment examination center or mobile X-ray unit, in a place of previous hospitalization, a cancer detection center or a health center.


What is a bronchoscopy? How will it help?

Bronchoscopy is a method of looking into the part of the lung that contains the bronchial tubes. The throat is anesthetized so that nothing is felt and a tube is inserted through the mouth into a depth of the lung. If any abnormal area is seen, a part of this tissue can be removed for diagnosis. The findings can be surprising. One patient was thought to have a cancer in this area, but the examination revealed a small chicken bone that had caused the block.

This is a method of looking directly into the area of the root of the lungs through a small incision in the neck. The patient is under anesthetic during this procedure. The instrument is a tube with a light on the end, through which it is possible to remove tissue for diagnosis by microscopic examination.


Can that spot be a pneumonia?

It's not pneumonia in the usual sense. But the spot can indeed be the result of a previous infection of some sort.


What is an exploratory thoracotomy?

The word "thoracotomy" means "cutting into the thorax." It is to the chest what an exploratory laparotomy is to the abdomen. This is a regular operation which is so-called when one does not know in advance what the surgery will entail but only that something inside is not normal. In other words, this operation is diagnostic, but at the same time it allows the doctor to do whatever is required for surgical treatment. If the diagnosis is known, this term is not used. For example, if it is known that this is a lung cyst, then the operation is called removal of the lung cyst. If the surgeon doesn't know in advance what to expect, the operation is called an exploratory.


What determines whether the operation will help?

That's often impossible to tell beforehand. All that can be determined in advance by examination and bronchoscopy and mediastinoscopy is whether the cancer is definitely inoperable.


How is cancer of the lung treated if it is suitable for surgery?

All or the part of the one lung containing the tumor is removed.

Can one live without one lung:
Yes, provided the other lung is normal. An adult can carry on all his activities with only one lung. The first man to have his lung removed for cancer was a physician, who practiced for many years thereafter.


Can this old man who has been coughing for many years tolerate removing one lung?

We can evaluate this beforehand by testing how much each lung is contributing to his total breathing capacity. Incidentally, when surgery is done, especially in this kind of individual, every effort is made to remove only a part, a lobe, of the lung. Obviously, if the tests show that the patient cannot endure this, then surgical removal will not be done.


What happens to the patient who is inoperable? What has he and the family to expect?

Inoperable does not mean nontreatable. The other approaches, by radiation and antitumor drugs, can be tried but the outlook is poor. These patients cough, are short of breath, have fever from infections, and become progressively weaker, with weight loss and poor appetite and spread of the tumor to other areas.


Does cancer of the lung come from smoking?

We know that cigarette smoking damages the lung. There is a good deal of evidence put forward by the American Cancer Society showing a statistically significant correlation between the two. Certainly you, the son, should stop smoking for this reason among other equally valid ones.


What is the survival with cancer of the lung?

It is sad that almost half the patients, when first seen, are already beyond the possibility of cure. Of one hundred patients with lung cancer only about five will be alive in five years.


What is Lung Cancer?

Do you think this can be anything but a cancer? For if it is cancer, he doesn't want surgery. He had a bad experience with his brother and would rather not be operated on.

Unless there is a positive tissue examination, the doctor cannot tell whether one has cancer. The spot could be an infection of some kind. This kind of "tumor" can even be a reaction to mineral oil, taken for constipation, that has gone the wrong way. Then again, sometimes a tumor is found which is not responsive to surgery but which may be very sensitive to radiation. The happiest experience is to find something completely undiagnosed that can be curatively treated by surgery. It happens more than just rarely.


Is the operation risky?

No more than any other major operation. The risk is not really or only in the operation but in the general condition of the patient the problems of heart disease, diabetes and disease in the other lung.