Can cytology detect cancer? What is cytology and its importance? - Medical Questions

Can cytology detect cancer? What is cytology and its importance?

Can cytology detect cancer? What is cytology and its importance?

Cytology is that branch of medicine which deals with the formation, structure, and function of cells. When it is mentioned in the area of diagnosis for cancer, it is sometimes called exfoliative cytology and refers to the technique of examining cells which have been normally shed or which are scraped from living tissue. The cells, which cannot be seen by the naked eye, are examined under the microscope, usually by a pathologist or a technician trained to know whether the cells look normal or not. 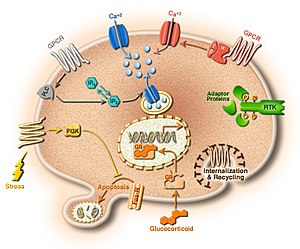 
What kinds of tests are cytological exams?

• Scrapings from the mouth to detect oral cancer

• Cell samples from the esophagus, stomach, pancreas, or duodenum


What is Cytology ? ( Clear & Complete Overview )

How are cytological exams performed?

A little fluid taken from the organ either from cells which have been sloughed off, cells which have been scraped off, or body fluid which has been taken by needle is spread on a glass slide. The fluid is stained with dyes and examined through a microscope. When cancer cells are present in the fluid, they can usually be spotted. The cytological exam of cells is based on the fact that cells on the surface of an organ are constantly being shed and falling off. In some places, these cells, both malignant and benign, can be scooped up in the normal fluid secretions. There are structural differences between the cancer cells and benign cells which can be seen under the microscope. The smear technique was first used in the Pap test. Today the new fiberoptic instruments make it possible to obtain smears from less accessible organs such as the stomach and the pancreas.


Can a final diagnosis of cancer be made with a smear test?

Most smear tests are used for screening to detect abnormal cells. Most doctors do not feel that the smear can be used to provide the final diagnosis of cancer. The smear consists only of individual scattered cells, sometimes clusters of them. A smear diagnosis gives strong evidence of the presence of cancer, but biopsy is still held to be essential for a final decision.


What are the advantages of the smear method?

There are several. Some smears, such as the kind used in the Pap test, can be done easily and cheaply for testing large groups for cancer. Some smears, like those for the Pap test and the lung sputum test, can detect the presence of cancer before any signs or symptoms appear. And in hardto reach areas such as the stomach, exfoliate cytology smears can provide evidence of the presence of cancer without the need for an operation.


Does the Pap test detect any cancers other than cervical?